Why I know what hyphy is

I do volunteer work! It’s super yay, as I get to relive my days of Key Club fame in high school. Even better, when college kids in color coordinated t-shirts try to stop me on the sidewalk to ask for money for one of 2,743 causes, I can say that I don’t donate money, I donate time and feel good that it’s actually true

The All Stars is an organization that puts together talent shows for inner city youth. They do the shows a few times a year and one cycle involves 3 Saturdays: an audition, a workshop, and the actual show. Everybody passes the audition, they just have to show up for all of the bits in order to perform in the show. It gets the kids constructively engaged in something that they like and creates a supportive environment for them to interact with one another. Sometimes the kids are awful and sometimes they’re astoundingly great. Mostly they sing or rap or dance. There’s usually one doing something like ballet. And a handful will do spoken word.

The dance performances are my favorite. I am staggered by these kids as they illustrate just how profoundly uncool I am. I am appalled slash thrilled by the skanky hoochie dancing the girls will sometimes do. That Beyonce-like ass wiggle thing is something I would totally do, if only I could…. how fun would it be to whip that talent out for special occasions?

At some level, I just appreciate being exposed to these kids. I would find many of them a little scary if I passed them on the street, so I like being around them in a non-scary way. They are the people in my neighborhood, after all. And there’s something so normalizing about seeing them nervous… because as much of a front as these kids put up, they do get nervous about getting up on stage and performing.

The added bonus — I get to find out about things like hyphy.

I can tell that you are very enthused, because you are bent over very meaningfully in a crouch to convey that. It’s true; standing up straight doesn’t say “I’m rocking out” the same way your Cro-Magnon stance does.

But you know what else may have convinced us that you are really in to your music *and* have been a lot more comfortable for you?

PS Your opener? Appaloosa? Other than reminding me of a childhood horsey story* she was el suck. 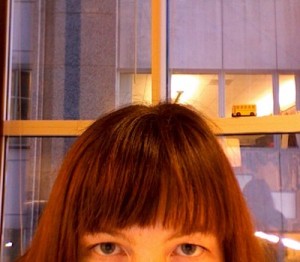 I got a new haircut yesterday, complete with bangs. Every time I see myself, it makes me giggle a little bit.

Filed under these are the days of my lives

This was one of the best shows I’ve been to in a long time.  Funnily enough, I didn’t even really knew what it was.  For her birthday, Sharon advertised an Ingrid Michaelson show and I was on board.  Granted, I only started out knowing who Ingrid Michaelson was because of that “here take my sweater” song that was on a ubiquitous Old Navy commercial pre-Christmas 2007.  But after she did a show earlier this year, I checked her out and decided she was all kinds of good.

Lo and behold, the Hotel Café tour is not just Ingrid, but a whole mess o’ people:  Cary Brothers (one guy, not some brothers), meiko, William Fitzsimmons, Jim Biano, Jessie Baylin, and one last lady I can’t remember except that her first name is Jessca, not Jessica.

The line-up was mixed, so you’d get two or three songs from each performer, and then one of the earlier performers came on again for two more songs.  I found this a bit confusing, since I didn’t know all of the performers, so I can vaguely remember that there was some breathy chic and then the other lady with the weird puffy hair.

There was a very cool vibe from the performers – it seemed like they’d all gotten along really well on the tour and were just having a lot of fun being together.  On many of the songs, one of the other acts would chime in.  For example, Ingrid had all of the ladies come on stage with her to do around, which was quite beautiful.  She said that there just aren’t enough rounds in pop music, and I agree!  Pip pip!

The best bits were:

meiko did a cover of No Scrubs