I’ve become obsessed with photography.  And like, all of my obsessions, I struggle with a paradoxically insanity of simultaneously believing in my own awesomeness and despairing that I won’t ever be good enough.  The obvious question is “good enough for what?”  To which, I would dance the dance of avoidance and skittering until I finally admit that I want IT.  IT being fortune and glory, of course.

I obsess over Twitter, checking and rechecking to see if I’ve made it on to Favrd.  My little heart weeps over and over that I can’t hang with the cool kids of Twitter fame.  I wish to be a good writer.  But wishing and composing 140 characters of quip is the extent of my willingness to be actually be a good writer.
I obsess over music, searching for one new unknown band after another.  I chase down leads based on “If you like ____, then you may like ____,” wasting hours, one dollar at a time.  And the next thing I know, my latest find is featured on Grey’s Anatomy and an Appple commercial.
Most recently, I have become crazed about photography, and this makes me cringe with sheepishness.  If there’s one thing I’ve learned in the past 2 1/2 years, it’s that everyone thinks they’re a photographer.  And oh god, now I think I’m one of them?  So here’s the thing:  I used to have a little Canon Elph, and then after I started to catch the bug, I bought a G9, which was a $500 camera that I replaced within 2 months with a EOS XS.  Which is to say, that I just started throwing money at my obsession and then I just started getting more and more obsessed.
I check Flickr non-stop to check how many views I’ve had, if there are any comments, and the cherry at the bottom of my shirley temple, if any photos have been starred.  I’ve started making contacts with strangers, and commenting on their photos, just because it gets them to comment back for me.  Admitting this makes me feel like such a loser, although if I could get dozens of complimentary comments and hundreds of views in aday the way it seems like everyone else on Flickr can, then I would embrace my loser like a long lost loser.
Anyway.
This is all just to preface that I got myself a new toy, and I LURVE it.  It’s a digital plastic camera called a Zumi, or technically, a Digital Harinezumi.  It takes retro style pictures with 70’s color and saturation, like a Holga or lomo camera.  And it is a tiny, wee little thing like a spy camera. 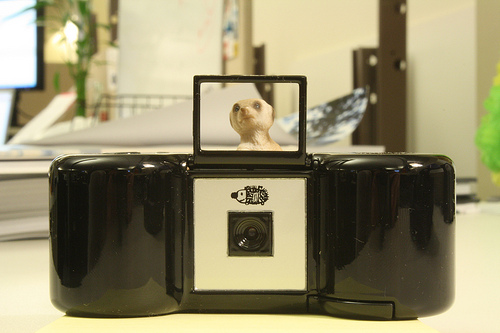 I don’t have to develop the film, and can just load the pictures from the miniature little memory card.  The pictures are definitely different, but cool.  The Zumi isn’t going to help make me a super duper photog, but I sure am going to have fun playing with it.  To hell with being awesome for a minute.