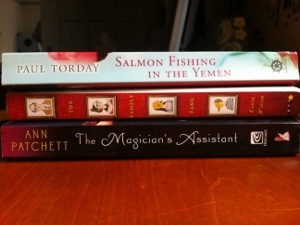 I recently read some books.  And had a torrid affair with the Beautiful Creatures young adult trilogy (which I surreptitiously read ebook style).

Salmon Fishing in the Yemen – vaguely amusing. reminded me a bit of Bridget Jones, but from a man point of view.  Characters were rather unbelievable in their portrayal of one archetype or another, but some were still likable.
Shrug.  Maybe see the movie instead?

The Family Fang – oh, what a weird book.  About a family of performance artists.  The parents were masters of their craft – doing destructive and crazy things in public just to see and record the reactions of passers-by.  Once they had kids, they started using them in the act and the kids grow up without learning how to engage in any normal sort of way.  The “art” is intended to make other people uncomfortable and that’s how reading the book largely made me feel.

The Magician’s Assistant – I remember reading and loving Bel Canto (also written by Ann Patchett) many years ago, so I had high expectations for this one.  I liked this book alright, but didn’t love it.  Sabine is in love with her gay friend, Parsifal the magician.  After Parsifal’s main man friend dies, he marries Sabine (because why not?) and then he dies.  His family, which he had told her had died in a car crash in his youth, is actually alive and living in South Dakota and seeks her out to get reacquainted with their lost son through her.
I couldn’t get behind the premise of the story and was left befuddled by the outcome, but it was written in a beautiful, dream-like way, making it an easy and engaging read.