The David and I got married on August 31 on a very sunny Saturday in Oakland.

It was a gorgeous day and it somehow, miraculously, turned out just like I had pictured it might.

We’ll get access to use the photographer’s photos after the new year, but in the mean time, I’ll try to convey what it was like with the various snapshots I have.

Overall, we wanted to feel like ourselves and I shied away from anything that I wouldn’t normally do. I wear dresses, but I don’t wear gowns. I like to decorate with flowers, but I don’t carry them around with me.

Normalcy be damned, though. I started weeping in the morning while I was getting ready and continued to do so off and on. So a lot of what I remember is crying and trying not to.

We both wrote our own vows, which ended up being even cuter than I thought we were. One of my favorite bits was The David’s promise to love me even when I have the snots, which he said precisely as I was blowing my nose.

Lisa Congdon officiated for us and did a wonderful job of it. She got married a few months before us. Leading up to her own wedding, she wrote so genuinely about her joy and delight in love. The sound and sentiment of her beliefs were exactly what I wanted I wanted to be surrounded by while we did the marrying. And fantastically, she agreed to give some of her Lisaness to us.

75 of our friends and family came to spend the day with us, including The David’s parents, his sister+brother-in-law+their-3-kids, and one of his buddies from England. I had a goodly representation from the east coast. But the majority of the guests are a part of the family we’ve built for ourselves here in the Bay Area. I was struck by how special and fleeting it was to have all of our people gathered together in one place; there will never be another opportunity like that.

I was surrounded by my best ladyfriends, who all picked out their own yellow dresses: one from my first real job, my sister-in-law, one from high school, and one from college.  (A fifth intended lady friend had had some unexpected travel conundrums and couldn’t make it.)

David wore some yah-HELLOW pants and all his dudes wore bow ties and blue gingham shirts. It was great. A fantastic blend of British and San Francisco hipster.

I had wanted the dinner to look and feel like something that I might have invited you to in my own home, without formal floral arrangements or place settings and I think it turned out beautifully. A dear friend and her mom sewed the yellow gingham table runners for me. The dishes and utensils were all compostable. The flowers were arranged in jars and cans that I’d saved for the past few months.

The food was fantastic. Seriously the best wedding food I think I’ve ever had. We had ribs and bbq chicken, a kale salad, a roasted corn and zucchini salad, and whole wheat mac n cheese. There were incredible deviled eggs, watermelon skewers, and sausage rolls passed before dinner. And there was an amazing cheese table. Later we had two kinds of pie, strawberry rhubarb and blackberry nectarine, with sweet cream ice cream. 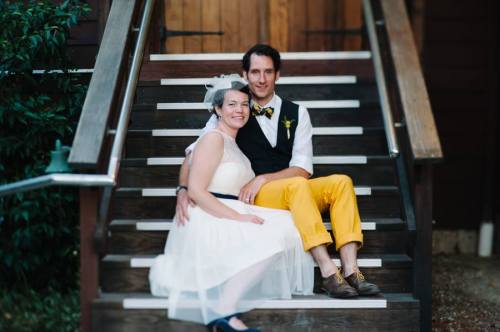 We demonstrated our swing dancing skills (rudimentary) for our first dance to Mumford and Sons I Will Wait. 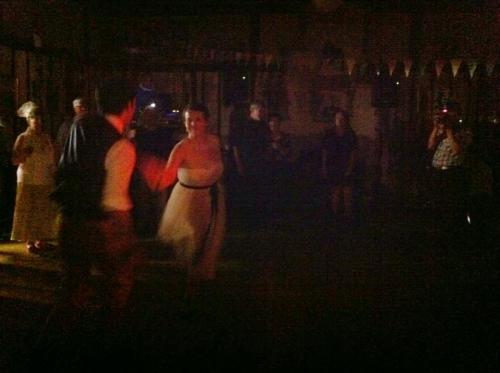 There were far off fireworks at the end of the night over the Oakland A’s coliseum. We packed up a ton of leftover food and a million flowers and went home to our new house.

I don’t feel different, but I do feel amazed and happy that we did it. And I am, as ever, surprised at just how much I lucked out with this fellow of mine.