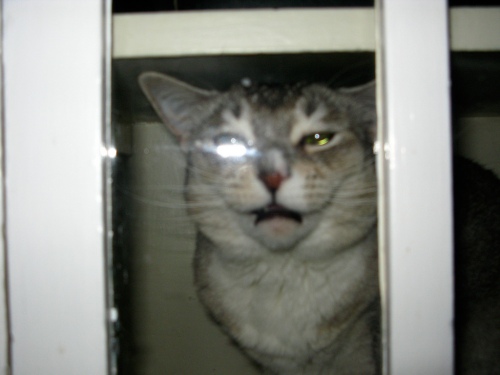 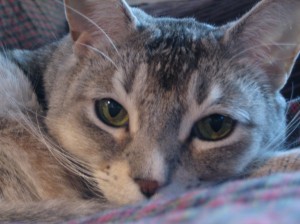 Maple died on Friday.  On Thursday night, I walked into the kitchen and saw her sprawled out by her food bowl.  Typically, she’d scamper right out of the kitchen if we happened to come in while she was in there, because eating and drinking is very special private time in Maple Land.  Or something.  But she just lay there.  I picked her up and put her by the radiator in the dining room, which is her typical hang out spot.  As soon as I put her on the floor, she just flopped down, exactly where gravity put her.

Around 4:30 in the morning, she started mewing, loudly.  Sometimes caterwauling.  I got up and held her on my lap, sitting on the couch for a while.  On Friday morning, I went to work.  I had an interview in the afternoon.  When I got home again in the evening, she was dead, and probably had been for quite some time.  She was in the same spot that she had been when we left in the morning.  I cried a lot.  David cried a bit.  We put her in a box.  Then we went out for dinner and drank a lot.

The local vet wouldn’t take her body, since I’d never actually taken her to the vet and she wasn’t “a client.”  So in the afternoon, we took her to the Humane Society.  I couldn’t go in.  I sat in the car while David did it.

She was only 8 years old.  I have no idea what was wrong.

And I feel very sad.  She was rather ridiculous, but she was my cat.  My pet.  The non-human creature who shared my home.  She would lick our hands, if they were exposed from under the covers in bed on a Saturday morning.  She’d thud herself against me to lean on when we went to sleep, and end up at the foot of the bed in the night.  When she was happy, she’d do a somersault of sorts, with her ass in the air and her head down between her legs, curled up and looking up at you from in between her hind legs.

She would holler and meow like crazy when we came home.  And I think she recognized the sound of my car; she seemed like she always knew when I was coming in.  She sat like a gargoyle protector on the arm of the couch, next to me, while I sat there.  She liked to head butt.  She loved coming in to the bathroom after I got out of the shower, rubbing around my wet legs.  She had a funny white spot on her nose, that extended on to the pebbled texture pink part of her nose.  Her whiskers curled up, not down.

I can’t describe what it is that feels so sad right now.  It doesn’t feel like missing, or regret.  I couldn’t claim that it was a tremendous cat love, or that I was ever a good cat lady.  But still.
There is a huge unfathomable sorrow.