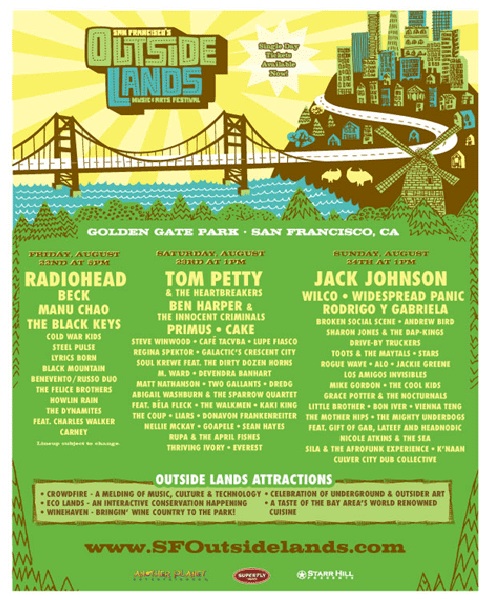 I went to the Outside Lands festival this weekend, for the whole shebang: Friday night, all day Saturday and all day Sunday. I am the sort of girl who will plan to do something that is supposed to be entirely recreational and fun, and then angst about it. I was afeared that it would make me crabby and over-sunned and beer boozy, but it turned out to be pretty laid back and non-distressing. There were akazillion people, but it was easy enough to keep a distance from the stage, settle down in a grassy spot and listen to music without being in the crush. This does mean that I didn’t have any intense way into the music experiences, because I wasn’t anyway near the stage and it was basically like listening to the CD, but in the outside.

But whatever. It was a neat thing to have done. The Squeeze was there with me for just about all of it. We spent Saturday with my friend Shiny and some of Sunday with his entourage. It seemed like a good thing to be spending more time with one another’s people. And it had been ages since there’d been good Shiny time, so that was stellar. But then, it turns out a funk of some manner of existed: a complaint was raised that the Squeeze was “rolling around on top of me, “mauling” me and making everyone feel uncomfortable.” I am very fuggered about this, as I don’t recall doing much of anything with him even a little. But one of the members of his crew is an ex-girlfriend, so perhaps the sentiment is coming from her. And I could just obsess over this little bit of snark indefinitely. So let’s just leave it at that, shall we? Harumph.

Aside from having that rather distasteful topic come come up after the fact, I did have a rather nice musing to myself while I was there. I had the (obvious) realization while I was there with the Squeeze that we were friends… I recognized the sense of aimless ambling and plotting about what to do next as that feeling of camaraderie. That we are friends. Pals. People who comfortable sharing and vocalizing any passing though. Of snickering and pointing out the ridiculous looking people. Of daring one another to eat raw oysters. Of just being in one another’s company.

It was surprising and nice thing to recognize.

Filed under Concerts, The David