Who keeps the Mambo?

I have a brother who I talk to almost every day on instant messenger, and another brother who I speak to once a year.  If that.  There’s been no falling out with Mambo, but we just don’t keep in touch, the same way that I don’t keep in touch with any number of people.  We’re far away, so there’s no face to face.  We don’t have a lot in common.  I hate talking on the phone.  He isn’t ever online.
Mambo is the nicest of the 3 of us.  Always has been.  He’s the most willing to do you a favor.  He isn’t a complainer.  He’s not as prickly as Joe or I are.  Even though he and Joe are the twins, I think that Joe and I are engineered on the same platform and Mambo is something else.  And so we don’t understand Mambo and his engineering.  We don’t understand why Mambo has been a waiter at Applebee’s for.. what?  10 years now?  He started doing it in college, and never stopped.  He never applied to take on managerial roles there.  And he doesn’t apply for wait jobs at higher end restaurants.  Or at restaurants that are farther than 20 miles from the middle of nowhere town where we come from.  I don’t want to judge, but I just can’t understand it.  How can he not want more?  I want to believe that he’s happy doing what he’s doing.  That he’s content.  But if it were me, I wouldn’t be.  And if our brother isn’t happy, shouldn’t we make suggestions and offer help?

Mambo went to visit Joe for a week in Seattle a few weeks ago.  Joe bought the airplane ticket and told Mambo he was coming to go skiing.  I heard (a bit from Joe and more from Nicole) that at the end of this trip, Joe offered to let Mambo come live in their finished basement for a while to try and get a new thing going.  Mambo could wait tables if he wanted to start.  And Nicole, who has been a recruiter, would try to help him get a job.  It sounds like Mambo said nothing to this offer.  He just didn’t reply.  Nicole guesses that he was offended.

This story cracks my heart.  Poor Joe, who can’t emote, who can’t relate – he tried to offer care.  To his twin, who is no way an other half.  And Mambo was hurt.  By his twin.  The genius one.  The one who our mother loves most.  The one who can do no wrong, even when he has done very, very wrong.  It’s always seemed like Mambo didn’t care about anything and that he could daydream his way out of any situation and who could let anything slide off of his back.  I guess he cared about this.
And I’m sorry, because if I had been there, I would have been doing the same thing.  I’m sorry we don’t understand.  I’m sorry that no one in my family seems to be the right sort of family that any of us ever needed.  But it’s the sweet one, the amenable Mambo, who should have someone nicer than us more than anyone else. 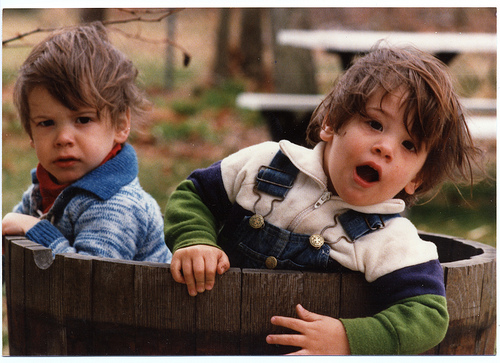 Filed under Family, Friends and other Humans