The day after Winnie was born, in the hospital

The first few weeks, especially, were rife with cryinging and overwhelmedness. Shell shocked. Weeping that ranged from a chronic seeping to violent, wracking sobs alone in the car, coming home from Whole Foods, where I had attempted to find a salve that would fix broken nipples.

David took the first 2 weeks of his 12-week paternity leave off at the start, which meant that he was there at the hospital and then home with us for another week and a half. He was crazy in love with the baby right from the start, eager to hold and care for her, to carry her around and show her the light coming in a window. I was jealous that he was getting this great love when I felt nothing.

He was also dedicated to supporting and taking care of me and doing anything he could to make me feel better. He made meals and changed diapers and did the bottle feedings. Anything I wanted that might make me feel like my life was still reasonable and in control, he’d do it. Things like trimming the bougainvillea or cleaning the baseboards. He made coffee.

We had to go into the pediatrician in the early days to get her weighed and they had me fill out a questionnaire, probing for postpartum depression. My answers resulted in more probing, face to face. Nothing like someone asking “are you ok?” when you’re not ok to get the tears flowing. Which resulted in follow-up conversations and calls from other doctors. But no further action, just feeling sheepish and sorry for myself as I had to explain that I didn’t have a strong local support system, but that I was trying to get out of the house, to see people, and connect with other new moms.

Breastfeeding, or lack thereof, was a big source of the sadness. I was so cavalier about breastfeeding before the baby was born. I won’t be crazy about it. If it doesn’t work, it doesn’t work. Shrug.
And then, when it didn’t work, I actually felt terrible. Like a failure. All of my doubts about momming, already coming to fruition. So I kept going to a lactation consultant, which would both give me hope that I could somehow make it happen, while simultaneously leaving me despondent as I faced the reality of what I’d have to do to even have a chance of making it work. (Evidently, there’s a name for it: “triple feeding.” It’s when you breast feed the baby, use a breast pump to collect breast milk, and feed the baby with a bottle. Three different things to do, as opposed to the one that you might do if you were just breastfeeding.)

And then David was going back to work and I was home alone. We were trying to figure out how to manage the nights. Me wanting, in theory, to take care of all of the night stuff so that David could function at work, since it didn’t matter how I felt during the day. But I could only really manage to be grossly sleep deprived for one day and then the next night, I couldn’t do it.

So David would get up in the nights, or early in the morning, and I would feel guilty. And David sang songs and made rhymes and wiggled limbs, while I was just waiting for the next time that the baby would fall asleep. And I felt guilty.

At the same time, I felt incredibly lucky and grateful for how much help David was.

Still, it was rough going. No family nearby and no friends who could just come and make it be ok.

Around 3 or 4 weeks in, my mental state started to even out and I didn’t feel quite so irrationally miserable. We developed a bit of a routine. The nights started getting better. Last night, she fell asleep around 9:30 and was down for the count until about 6:30 am. Some nights, she makes enough grunty wake-y noises, that David gets up, usually around 2 or 3 and feeds her while she’s still not quite awake. She falls back asleep and he gets back into bed. It’s rare these days that anyone actually has to get up out of bed with the baby in the night.

She makes a lot more eye contact and even if the expression on her face says that she’s plotting my ultimate demise, it’s helped a lot that we can look at each other. She’s started to smile and sometimes if I try very hard, I can actually coax one out of her. Most days, I manage to accomplish some tasks… loading all of the dirty dishes into the dishwasher, moving laundry into the dryer, vacuuming up the dog hair. I eat lunch and change out of my pajamas. Brush my teeth. Not always in that order. 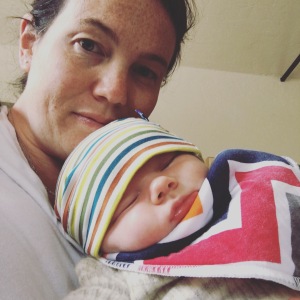 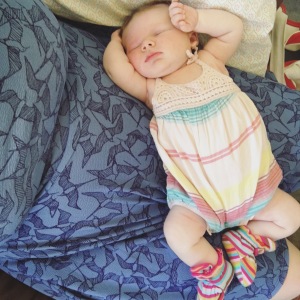 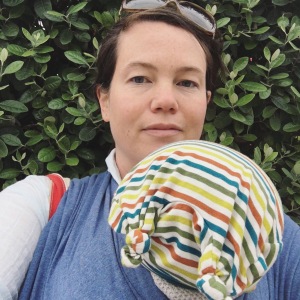