“one day i will have your tongue ripped out with hot pincers, and that will be hilarious”

I just finished reading A Dance with Dragons, the fifth book in this epic series of books.  And even though there are still two books and so many unanswered questions left, I am just so glad to be free!  Finally!  Free from the madness of thousands upon thousands of pages.  The entirety of August and September were monopolized by this saga of a billion pseudo-medieval characters.  Characters, who George RR Martin had no qualms about viciously murdering on a regular basis.  By the end, I was all “Yeah.  You’re dead?  Right.  Who’s next?  Whatever.  You’ll probably just end up being a zombie anyway.”

I’ve so over glutted on these books I can’t even form an opinion about whether or not I liked them.  They were addictive, that’s for sure.  I absolutely could not stop.  I read into the night.  I read first thing in the morning, before I could spur myself out of bed.  I read while walking through downtown San Francisco to get to work.

There’s a tv show of the first book that I’d love to watch, but it’s on one of those fancy channels.

So in the interim between now and the availability on Netflix, I will make do with these fancy illustrations from the Fire and Ice wikipedia: 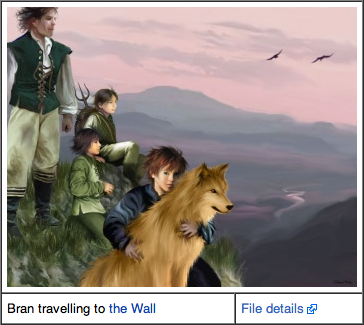 Probably these images can really help you to visualize just how awesome the awesomeness is.

Tagged as "Game of Thrones"

2 responses to ““one day i will have your tongue ripped out with hot pincers, and that will be hilarious””